Zipline is an open-source algorithmic trading simulator written in Python.

This tutorial assumes that you have Zipline correctly installed, see the Installation instructions if you haven’t done so yet.

How to construct an algorithm¶

Every Zipline algorithm consists of two functions you have to define:

Before the start of the algorithm, Zipline calls the initialize() function and passes in a context variable. context is a persistent namespace for you to store variables you need to access from one algorithm iteration to the next.

After the algorithm has been initialized, Zipline calls the handle_data() function once for each event. At every call, it passes the same context variable and an event-frame called data containing the current trading bar with open, high, low, and close (OHLC) prices as well as volume for each stock in your universe.

Let’s take a look at a very simple algorithm from the zipline/examples directory, buyapple.py. Each period, which is a trading day, it orders 10 shares of the Apple stock and records the price.

As you can see, we first have to import some functions we would like to use. All functions commonly used in your algorithm can be found in zipline.api. Here we are using order() which takes two arguments: a security object, and a number specifying how many stocks you would like to order (if negative, order() will sell/short stocks). In this case we want to order 10 shares of Apple at each iteration.

Finally, the record() function allows you to save the value of a variable at each iteration. You provide it with a name for the variable together with the variable itself: varname=var. After the algorithm finished running you will have access to each variable value you tracked with record() under the name you provided (we will see this further below). You also see how we can access the current price data of the AAPL stock in the data event frame.

How to run the algorithm¶

To now test this algorithm on financial data, Zipline provides three interfaces: 1. the command line via the zipline command, 2. the Jupyter Notebook via the zipline magic, and 3. the run_algorithm() to execute your algo like any Python script, for example in your IDE.

Before we can run any algorithms, we need some data.

If you haven’t ingested data yet, then run:

where <bundle> is the name of the bundle to ingest. You can use the default quandl for now to work with the Quandl WIKI price data. Check out the ingesting data section for more detail on how to obtain other new data.

After you installed Zipline you should be able to execute the following from your command line (e.g. cmd.exe on Windows, the Terminal app on OSX, or e.g. the bash shell on Linux):

As you can see there are a couple of flags that specify where to find your algorithm (-f) as well as parameters specifying which data to use, defaulting to quandl.

There are also arguments for the date range to run the algorithm over (--start and --end).To use a benchmark, you need to choose one of the benchmark options listed before. You can always use the option (--no-benchmark) that uses zero returns as a benchmark ( alpha, beta and benchmark metrics are not calculated in this case).

Finally, you’ll want to save the performance metrics of your algorithm so that you can analyze how it performed. This is done via the --output flag and will cause it to write the performance DataFrame in the pickle Python file format. Note that you can also define a configuration file with these parameters that you can then conveniently pass to the -c option so that you don’t have to supply the command line args all the time (see the .conf files in the examples directory).

Thus, to execute our algorithm from above and save the results to buyapple_out.pickle, we call zipline run as follows:

run first calls the initialize() function, and then streams the historical stock price day-by-day through handle_data(). After each call to handle_data() we instruct zipline to order 10 stocks of AAPL. After the call of the order() function, zipline enters the ordered stock and amount in the order book. After the handle_data() function has finished, zipline looks for any open orders and tries to fill them. If the trading volume is high enough for this stock, the order is executed after adding the commission and applying the slippage model which models the influence of your order on the stock price, so your algorithm will be charged more than just the stock price * 10. (Note, that you can also change the commission and slippage model that zipline uses, see the.

Let’s take a quick look at the performance DataFrame. For this, we use pandas from inside the IPython Notebook and print the first ten rows. Note that zipline makes heavy usage of pandas, especially for data input and outputting so it’s worth spending some time to learn it.

As you can see, there is a row for each trading day, starting on the first business day of 2016. In the columns you can find various information about the state of your algorithm. The very first column AAPL was placed there by the record() function mentioned earlier and allows us to plot the price of apple. For example, we could easily examine now how our portfolio value changed over time compared to the AAPL stock price.

As you can see, our algorithm performance as assessed by the portfolio_value closely matches that of the AAPL stock price. This is not surprising as our algorithm only bought AAPL every chance it got.

The Jupyter Notebook is a very powerful browser-based interface to a Python interpreter (this tutorial was written in it). As it is a very popular interface for many quantitative researchers, Zipline provides an easy way to run your algorithm inside the Notebook without requiring you to use the CLI.

To use it you have to write your algorithm in a cell and let Zipline know that it is supposed to run this algorithm. This is done via the %%zipline IPython magic command that is available after you import zipline from within the IPython Notebook. This magic takes the same arguments as the command line interface described above. Thus to run the algorithm from above with the same parameters we just have to execute the following cell after importing zipline to register the magic.

Note that we did not have to specify an input file as above since the magic will use the contents of the cell and look for your algorithm functions there. Also, instead of defining an output file we are specifying a variable name with -o that will be created in the name space and contain the performance DataFrame we looked at above.

To execute an algorithm like a Python script in your favorite IDE, use the run_algorithm() (see API Reference).

To adapt the buyapple.py example from above (see buyapple_ide.py in the same directory), simply add the following:

We pass the key algo parameters to run_algorithm(), including some benchmark data for the S&P 500 that we download from the Federal Reserve Economic Data Service (available for the last 10 years).

The result return value contains the same DataFrame as in the previous example. Instead of defining an analyze() function as part of the algorithm, you can apply your preferred logic to this DataFrame.

How to use historical prices: a dual Moving Average Cross-Over example¶

The Dual Moving Average (DMA) is a classic momentum strategy. It’s probably not used by any serious trader anymore but is still very instructive. The basic idea is that we compute two rolling or moving averages (mavg) – one with a longer window that is supposed to capture long-term trends and one shorter window that is supposed to capture short-term trends. Once the short-mavg crosses the long-mavg from below we assume that the stock price has upwards momentum and long the stock. If the short-mavg crosses from above we exit the positions as we assume the stock to go down further.

As we need to have access to previous prices to implement this strategy we need a new concept: History

data.history() is a convenience function that keeps a rolling window of data for you. The first argument is the number of bars you want to collect, the second argument is the unit (either '1d' or '1m', but note that you need to have minute-level data for using 1m). For a more detailed description of history()’s features, see the API Reference. Let’s look at the strategy which should make this clear: 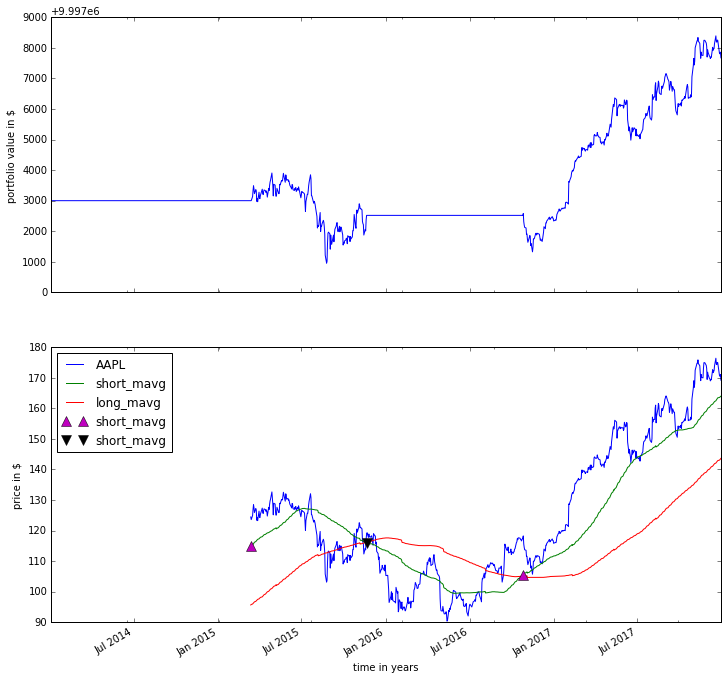 Here we are explicitly defining an analyze() function that gets automatically called once the backtest is done.

Although it might not be directly apparent, the power of history() (pun intended) can not be under-estimated as most algorithms make use of prior market developments in one form or another. You could easily devise a strategy that trains a classifier with scikit-learn which tries to predict future market movements based on past prices (note, that most of the scikit-learn functions require numpy.ndarrays rather than pandas.DataFrames, so you can simply pass the underlying ndarray of a DataFrame via .to_numpy()).

We also used the order_target() function above. This and other functions like it can make order management and portfolio rebalancing much easier. See the API Reference for more details.

We hope that this tutorial gave you a little insight into the architecture, API, and features of zipline. For next steps, check out some of the examples.

Feel free to ask questions on our mailing list, report problems on our GitHub issue tracker, or get involved.